Winning the Strike: How Chicago Teachers Made History

Last month, the Chicago Teachers Union did something that no one thought possible a few years ago when the Great Recession took hold. Back then, the economic crisis and devastating budget cuts gave corporate-backed school “reformers” the conditions they needed to thrust the war on public education into high gear.

The Chicago teachers strike is a groundbreaking event in the fight to defend public schools and resurrect a fighting labor movement. Months of preperation went into the victorious strike that forced Mayor Rahm Emanuel to back down from his most damaging attacks against teachers. The union knew it needed to build alliances beyond labor and win the support of parents and communities before moving to strike. Its success in doing so was central to winning the standoff.  END_OF_DOCUMENT_TOKEN_TO_BE_REPLACED

The One Percent Targets D.C. Schools

In 2010, Washington D.C. residents ousted the much-maligned former Mayor Adrian Fenty, in what was largely considered to be a referendum against his notorious union-busting Schools Chancellor Michelle Rhee. Fenty’s replacement, Vincent Gray, opposed Rhee’s reforms while Gray served on the City Council.

But as mayor, Gray has done little to reverse the damage that Rhee inflicted on D.C. schools. In fact, the mayor – along with Deputy Mayor for Education De’Shawn Wright and the current Chancellor Kaya Henderson – has mostly continued Rhee’s policies and is now poised to make things much worse. END_OF_DOCUMENT_TOKEN_TO_BE_REPLACED

Amid Possible Strike, D.C. Labor and Occupy Movements March Together

But like Wall Street, K Street is now also home to activists who are fed up with a system that rewards the wealthy while delivering nothing but cuts to the rest of us. Part of the general Occupy Wall Street movement that has spread around the country, “Occupy DC” activists are camped out in MacPherson Square where they are working to replicate the kind of occupation that has rocked the streets of New York’s financial district for the last month.

This week, K Street was also part of a march route for building cleaners fighting for a fair contract. The workers – who are preparing for a possible strike in the coming days – marched shoulder to shoulder with Occupy DC protesters. END_OF_DOCUMENT_TOKEN_TO_BE_REPLACED

The War on D.C. Taxi Drivers

The D.C. Taxicab Commission recently expanded its war on D.C. taxicab drivers by going after after the journalists. After two independent journalists were arrested by U.S. Park Police officers at a June 22 public hearing held by the commission two weeks ago, dozens of angry drivers walked out in protest.

One might ask what sort of behavior would provoke the arrests of journalists covering a public meeting. In this case, the two journalists — Pete Tucker of TheFightBack.Org and Jim Epstein of Reason TV — were recording the meeting, and when Tucker took a picture, he was told by a commission inspector to stop.

Shortly after Tucker took another picture, Park Police arrived and asked him to leave. Tucker remained seated and reminded the officers that he was a journalist and that this was a public meeting. At that point, he was cuffed and detained on charges of disorderly conduct. Epstein captured Tucker’s arrest on his cellphone camera before he, too, was arrested as he tried to leave. The video has since gone viral, to the embarrassment of the Taxicab Commission and the Park Police. END_OF_DOCUMENT_TOKEN_TO_BE_REPLACED

Amid the sweltering humidity at dusk in Washington D.C., taxicab drivers line up their cars at a Sunoco gas station on the corner of 15th and U Street. The mostly African immigrant drivers circulate flyers among each other, discussing the fate of their jobs and making arguments about the need to organize.

One driver pulls in and drops off a petition.

After talking for a few minutes, the young Ethiopian driver grabs some more flyers and pulls out of the station.

For the past month, this has been the scene at several gas stations and other taxicab hubs throughout the district where drivers have been coming together everyday to organize against a proposed restructuring of the city’s cab industry. END_OF_DOCUMENT_TOKEN_TO_BE_REPLACED

The Badger Rebellion Comes to DC

First published at The Progressive and Counterpunch 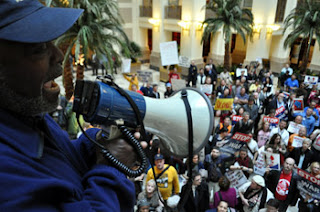 After wiping out 50 years of union rights in Wisconsin, GOP state senators from the badger state made the journey to Washington, DC on Wednesday to attend a $1,000-a-head corporate fundraiser hosted by the BGR lobbying firm.

But since they had traveled so far from their home state to collect their corporate prize money, workers and other activists in the nation’s capital wanted to make sure that the Wisconsin Republicans felt right at home. END_OF_DOCUMENT_TOKEN_TO_BE_REPLACED